Posted on October 11, 2013 by turningaroundamerica

We are ending our second week of Turning Around Boston (Public Schools) and we are both exhausted. We have seen many classrooms in Boston and I am astonished at the resilience of kids. In a class last week a young student walked into the classroom and became very animated. He listened attentively and watched my demonstration carefully. When he started working and shaping with the rasps and files on his piece of wood he laughed out-loud. When I praised his craftsmanship he just looked at me and smiled.

His exuberance was mesmerizing. Toward the end of class the principal came in and exclaimed to both of us that he had never seen this student smile. It turned out that he had been in this country a short period of time and in the school for only two weeks. He could not speak English and this was the first class that he could really participate in. It turns out he knew two words of English because as he left the classroom he walked up to Jenn and said, “Thank You.” 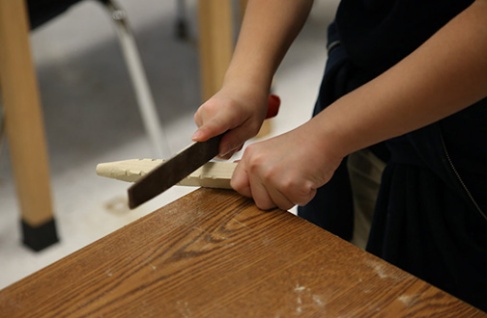 Collaborative Team of Jenn Moller and Beth Ireland
View all posts by turningaroundamerica →
This entry was posted in Uncategorized. Bookmark the permalink.